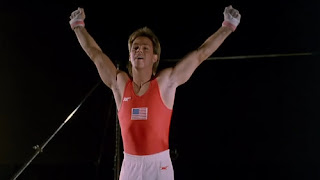 It's that time of the year again, August. The month we all hated as it was the end of our summer vacation and the beginning of back to school. So a little treat is needed and what could be better then Olympic gymnast Kurt Thomas, who combines his gymnastic ability with martial arts to enter a deadly competition? I'm going to guess NOTHING!. Thomas has a few awards under his leotards. In 1985 he earned the big nomination for a Razzie Award as Worst New Star. Wow nothing but the best for you here at Simplistic Reviews.

So are you ready? Cue up your copy, sit back and be in awe over how a movie like this could even exist. Thank you movie gods!